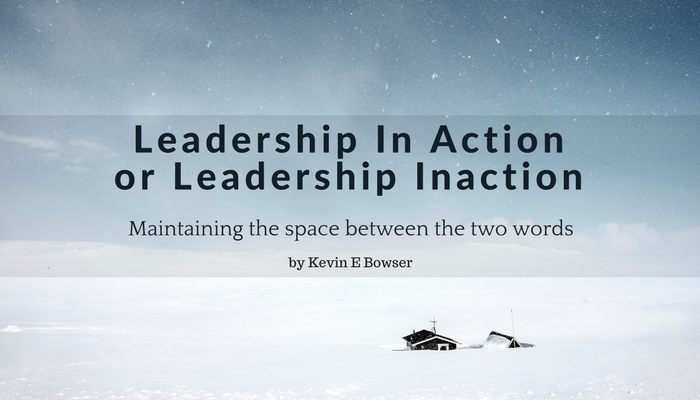 Many of us who are working for a living and trying to be productive members of society are observing ample instances of inaction by our elected leaders. When it seems obvious that taking a stand is necessary and the appropriate thing to do, instead of for the most part we hear the sound of crickets from our elected political leaders.

But as much as I want to blame these elected political leaders, I can’t. It seems that what “sells” is that which is most pleasing to the ears of the listener. And, as a free market capitalist, I can’t blame them for selling a product that so many appear to want to purchase. The sad truth appears to be that “Inaction sells.”

But inaction has a tremendous downside. It has the effect of sucking life and courage from those of us who would lead. Consider what the great businessman and philanthropist Dale Carnegie once said:

“Inaction breeds doubt and fear. Action breeds confidence and courage. If you want to conquer fear, do not sit home and think about it. Go out and get busy.”

As we see both on the platform of many churches every Sunday and on the stage of political life on a daily basis, the inaction of those leaders grows from the seeds of doubt and fear manifested mainly by the lack of their own convictions for doing “the right” thing. They are plagued by so much self-doubt that they are practically paralyzed from acting. It is either that, or they are so concerned that someone won’t like them or won’t invite them on the weekend TV shows that they stay to the safety and security of the status quo.

Who do you see out there that would be a great example of a current day man in (space) action? Who do you know that is someone who does not worry about whether he is liked or admired by the culture because his courage and his convictions for doing what is right weigh heavier on him than his desire for popularity.

What are you doing to eliminate the space between “in” and “action”?