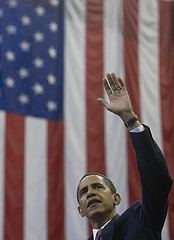 “It is more important to the rest of the world that your American president appear or be or be perceived to be a leader than for him to actually be a leader.”

This was a statement made by some colleagues at dinner the other night. I have been in Spain for most of this past week on a business trip. And all of my colleagues are not from the United States. One was from New Zealand, one was from Belgium, one was from the U.K., and the folks we were meeting were all from Spain. So, I tried to keep my mouth shut as much as possible lest I create an inter nation incident!

But I am struck by this question: What are the implications of this kind of thinking?

This was a painful thought for me to consider and it has been on my mind since the moment that one of them said it to me.

What does that mean about leadership?  Is that a statement about political leadership in particular? Is any part of that sentiment true?  What about your leadership role?

My colleagues were insistent that their native countries didn’t really care about our president’s actual leadership ability. All they cared about was the the rest of the world needed to perceive that he is a strong leader.  They were convinced that in order for their to be stability and peace, our president must be perceived to be a great leader by the other nations of the world.  And they indicated, that sadly, he was not perceived as much of a leader in Europe.  In fact, they were greatly disappointed in his performance and perception up to this point.

As if that were not bad enough, they seemed to indicate that we in the U.S. should be more concerned about his perception than his performance, abilities, or actions. This is a deeply troubling thing for me. For to me, it is far more important to “be” than to “appear to be”.

I am not sure where I am going with this concept. But I want to get these thoughts out and see if I can generate some comments and some conversations. I think I know where I want to go and how I want to develop my thoughts. But I really want to hear from you.

Categories: Elected, Leadership Styles, Leadership Traits, Recognized Leaders
Disclosure of Material Connection: Some of the links in the post above are “affiliate links.” This means if you click on the link and purchase the item, I will receive an affiliate commission. Regardless, I only recommend products or services I use personally and believe will add value to my readers. I am disclosing this in accordance with the Federal Trade Commission’s 16 CFR, Part 255: “Guides Concerning the Use of Endorsements and Testimonials in Advertising.”