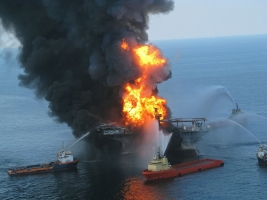 Something is either broken or old. In either case, the word connotes that something needs to be repaired. I am not sure exactly how that aligns with my understanding of restoration. But I think it is not too far from the reality of it.

There are several recent examples of restoration that are at various stages of the process. One example is from the industry in which I am employed. And the second is from the world of college football. Consider with me for a moment – the Deepwater Horizon incident in the Gulf of Mexico and the scandal that erupted involving a former football coach at Penn State University.

The Deepwater Horizon created an oil spill and plume covered almost 360 square miles with the most severe reduction of biological abundance and biodiversity impacting an area about 9 square miles around the wellhead, and moderate effects seen 57 square miles around the wellhead. Yet, once the flow was finally stopped and the initial massive cleanup efforts were concluded, the area today is largely unnoticeable from an ecological standpoint. I will not argue the relative merits or impacts to onshore locations or the local economies. Those seem to operate sometimes outside the bounds of reasonable expectations because of the human emotional impact. But my point here is, although potentially unpopular and controversial, that nature began to heal itself. Nature restored itself. 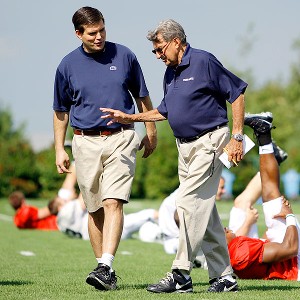 Now consider the scandal that erupted at Penn State over the deplorable and unconscionable acts of a former coach, Jerry Sandusky. Following a very tumultuous time in which the collateral damage was significant, the guilty party was sentenced to jail where it is my hope he will spend the rest of his natural life. I am not concerned about his legacy. I am concerned about the legacy of a good and decent man who died during the tumult that surrounded the scandal.  Joe Paterno died in the days following the scandal eruption and his son and assistant coach, Jay Paterno, is striving to restore his father’s legacy. Unlike nature, his father’s legacy will not restore itself. Even when the final chapter is written on the scandal and the record will show that Joe Paterno followed the protocol of the university, he will be forever tarnished by the scandal in which he played no part.

So, how does a guy like Jay Paterno go about restoring the legacy of his father?

He goes about it by trying to put forth facts. But facts are not what sells stories and drives a bloodthirsty media into a frenzy. So, in the end, what Jay Paterno is doing is retelling the story and noting that the actions with which he is identified did not occur in his presence nor with his knowledge and the scandal itself is but a short moment in Joe Paterno’s life and legacy. Jay Paterno writes in his book that the greatness of his father was in his relationship to his family, his relations with his players through the years, the relationships with his assistant coaches, and the impact that all of that had on most fall Saturdays in Happy Valley. 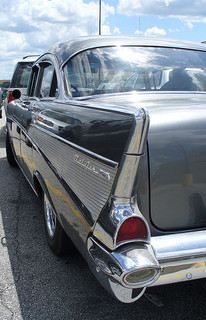 This article is already longer than most. But I want to use these two situations to paint a picture about restoring a legacy. And here are those points can come from the paint of the picture:

The process of restoration is best seen from a Biblical perspective in Galatians, chapter 6. This passage deals with Spiritual restoration but its applicability to today’s topic is clear and unavoidable. Consider these principles:

Restoration is necessary but not easy – One of the translations of the word “restore” in this passage refers to a doctor setting a broken bone. Helping someone with a broken legacy may be just as painful a setting that broken bone.

Restoration is a group effort – The responsibility for restoration falls on those “who are spiritual.” But before our overgrown humility kicks in, consider that we all have weaknesses and we all need one another for encouragement and to spur us to growth.

Restoration must be done with humility – We are dealing with hurting men. And the last thing they need is someone with a haughty or “holier than thou’ attitude.

Restoration involves sharing another’s burden – Burdens are heavy. No one ever called a butterfly a burden. Burdens are bulky and are best handled with many strong backs, arms, and legs.

Restoration needs to be done in love – Real love speaks up, stands up and acts up. Real love causes us to act and get involved in the lives of others who are hurting.

So, what is the legacy leadership principle here?

It is this. Guys, we need to stand together and surround those among us whose legacies are suffering right now and that need restoration.   This is central to the mission and message of who Leadership Voices is.

Be sure to join us next Friday for the fourth installment in this series.

Categories: Fatherhood Friday, Legacy Leadership
Disclosure of Material Connection: Some of the links in the post above are “affiliate links.” This means if you click on the link and purchase the item, I will receive an affiliate commission. Regardless, I only recommend products or services I use personally and believe will add value to my readers. I am disclosing this in accordance with the Federal Trade Commission’s 16 CFR, Part 255: “Guides Concerning the Use of Endorsements and Testimonials in Advertising.”