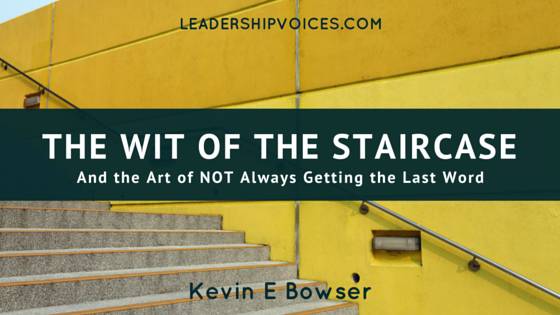 The French seem to always be in possession of le mot juste (the right word). They indeed have a phrase for the moment following a tense or embarrassing incident that happens to those who are not gifted with a quick wit:

Translated, it means “the wit of the staircase”. Or, more clearly as it relates to a situation where you only come up with a witty response to a verbal challenge or situation after you’ve turned on your heel and left the scene.

According to Wikipedia, it is the name for the phenomenon that comes from French philosopher Denis Diderot’s description of such an occurrence. At some point during a dinner at the home of statesman Jacques Necker, according to history, a remark was made to Diderot which left him speechless at the time. In French he says, “l’homme sensible, comme moi, tout entier à ce qu’on lui objecte, perd la tête et ne se retrouve qu’au bas de l’escalier.”

Translated into English it means, “a sensitive man, such as myself, overwhelmed by the argument leveled against him, becomes confused and can only think clearly again [when he reaches] the bottom of the stairs”.

I can relate to that feeling, can’t you?

In this case, “the bottom of the stairs” refers only to the architecture of the kind of hôtel particulier or stately home to which Diderot had been invited. Obviously the reception rooms were located on an upper level or at least one floor above the ground floor. Therefore, to have reached the bottom of the stairs means definitively to have left the gathering and left the awkward or embarrassing exchange that had just occurred.

It is this. Regardless of the extremely witty, pithy, and potentially powerful retort that comes to mind after the fact, we, like Diderot, are best to utter it at the bottom of the staircase and under our breath rather than in the anger or frustration of the moment. Even worse would be to climb the stairs and re-enter the fray and deliver hurtful or cutting remarks that we would surely regret later.

How about you? Do you always think of just the “right” retort just after the moment passes? Do you always feel the need to get the last word in? Are you using it as a way to measure your cleverness and wit?

Think of some situations in which you did get the last word in. Was the outcome as positive as it could have been?

“It is better to remain silent and be thought a fool, than to speak up and remove all doubt.”

These words, or variants of these words, according to QuoteInvestigator.com, have been attributed to none other than Abraham Lincoln, Confucius, Mark Twain, and even Al Capone. It has also been attributed to the lesser known Mark Switzer, L. Frank Baum (Yes, the author of The Wizard of Oz), Arthur Burns, and “Doc” Rockwell. It is even given a Biblical origin in the Proverbs.

Here is the point one more time.

As leaders, we need to control our tongue. It is one of the most difficult things for many of us to do. We need to realize that it is not the end of the world for someone to think that they have gotten the best of us in that moment. Real leadership is exhibited over time and not in the quick-witted repartee in a social setting.

Categories: Leadership Traits, Quote, Wit & Wisdom
Disclosure of Material Connection: Some of the links in the post above are “affiliate links.” This means if you click on the link and purchase the item, I will receive an affiliate commission. Regardless, I only recommend products or services I use personally and believe will add value to my readers. I am disclosing this in accordance with the Federal Trade Commission’s 16 CFR, Part 255: “Guides Concerning the Use of Endorsements and Testimonials in Advertising.”