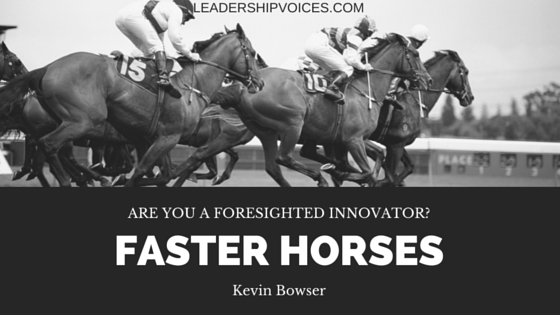 There is a great quote from automobile industrialist, Henry Ford, that has been on my mind lately. It deals with a leadership trait that is as in short supply today as it was nearly 100 years ago.

If I would have asked people what they wanted, they would have said “faster horses” — Henry Ford

What a great quote! And what a great insight into a key leadership trait for you and me today.

What is the leadership trait?

The trait that I want to focus on today is being a Foresighted Innovator. The business community is all about collaboration these days. And I believe in collaboration. I really do! But, some􏰀times, a true leader, an innovator like Henry Ford, is able to see far beyond what those around him see. He doesn’t need a “focus group” to help him understand the market. He has the foresight to see beyond what is and is able to see what needs to be and what can be. In reality, there was no one to collaborate with Henry Ford because Ford was able to see things that others simply could not.

There has always been a “need for speed.” In fact, the Pony Express was built around a state of the art utilization of the best resources available at the time. The Pony Express stationed swift horses at intervals along a route and the rider took each horse to the limit of its strength, endurance, and abilities. The rider would then change horses and continue on his trek to deliver the important news, mail, or information of the day. These riders were counted on and they provided a vital link between the established East and the developing West, especially California.

I believe that it is that background and history that must have been on Henry Ford’s mind. The prevailing wisdom of the day would have been that what people needed was faster horses or horses with greater stamina to extend their effective range and shorten the time that it took for a message to make the 10 day journey from the east coast to the west coast.

But Henry Ford was a “Foresighted Innovator.” He was a real leader. He didn’t give people what they wanted because they were stuck in their limited view of the world and the paradigm of what they could foresee or imagine. Rather, he gave them what they didn’t even know that they needed. At the very least, he gave them something that they could not imagine. The average person really didn’t know or couldn’t verbalize their need. Instead, Ford forged ahead with foresight and created something that changed the world. He innovated. He gave the world the first mass produced and affordable automobile. He gave us mobility and a whole new way of producing goods that had never been employed to that extent before.

He could have chosen to become a horse breeder. No one would have thought that to be a strange endeavor. I am glad that he didn’t. I am glad that he chose to be a Foresighted Innovator. And, by the way, that automobile that he created was indeed faster than most of the horses out there.

Think about that today. Be a foresighted innovator. Be a leader.

One final word on this quote. – There is not conclusive evidence that Henry Ford is actually the originator of the quote. However, the sentiment expressed by it is consistent with some of the ways that Henry Ford viewed the world and the industry that he helped create. And I recognize that there are equal and opposite leadership implications that can be drawn from this quote, regardless of the originator.