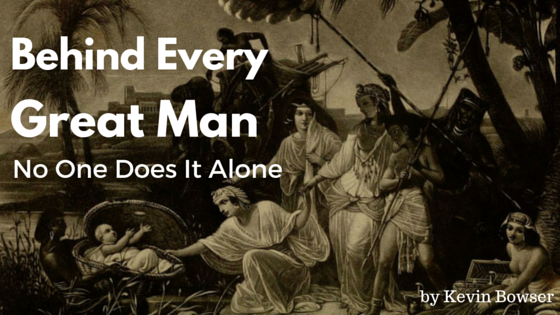 One of the greatest leaders of all of history is Moses of Biblical fame. Moses is considered a great leader because of the mighty deliverance of God’s people from the bondage and slavery of Egypt.

It is not my normal habit to use too many Biblical illustrations in my writing. But today is Mother’s Day and today I am reminded of Moses and of his mother. Do you recall her name? Don’t go look it up. Try to remember it. Do you give up? The mother of Moses was Jochebed.

The name “Jochebed” translates or implies, “glory of Jehovah” or, “Jehovah (is her or our) glory.” Therefore, you could make the case, based upon this name of the mother of Moses, that the announcement of Jehovah, as the name of God, was not made for the first time when God revealed Himself under that title to Moses in the burning bush. Rather, Jochebed’s name revealed what God himself would later reveal to Moses out in the desert.

What is the leadership lesson on this Mother’s Day?

And Moses is not an isolated case. Jochebed bore three children and all of them were great leaders. There was Moses, who became the greatest rescuer and deliverer of a captive nation the world has ever known. There was Aaron, who would speak for Moses and who became Israel’s first high priest and the start of the Aaronic priesthood. And there was their sister Miriam, the gifted poetess and musician, who was intensely associated with her two brothers in the history of Israel.

Abraham Lincoln is credited with saying this: Behind every great man is a great mother.

But that is really hard quote for which to find a provable attribution. However, you can find these words attributed to Abraham Lincoln. And they seem to fit a little bit better for today.

“I remember my mother’s prayers and they have always followed me. They have clung to me all my life.”

Remember this today. No one achieves greatness or success in a vacuum. No one does it alone. There are many Godly mothers out there today who are raising the next Moses, Aaron, or Miriam.

Categories: Biblical, Leadership Lessons, Recognized Leaders
Disclosure of Material Connection: Some of the links in the post above are “affiliate links.” This means if you click on the link and purchase the item, I will receive an affiliate commission. Regardless, I only recommend products or services I use personally and believe will add value to my readers. I am disclosing this in accordance with the Federal Trade Commission’s 16 CFR, Part 255: “Guides Concerning the Use of Endorsements and Testimonials in Advertising.”