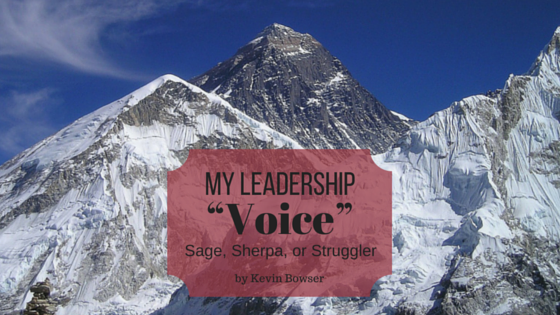 It is time to take Leadership Voices and this site to some new levels. Toward that end, I am looking around for resources and inspiration to spur me onward and upward.

Recently I found some great resources when I attended a webinar being hosted by Michael Hyatt. Many of you will recognize his name and know of his success in this arena. I have been following Hyatt for several years and have incorporated many of his thoughts, tools, or suggestions.

One of the tidbits of truth that I received from that webinar was to determine my “voice.” You would think with a website such as LeadershipVoices.com, that would be something that I already had a pretty good handle on. And you would be correct. My voice has become something with which I am very comfortable.

What was the tidbit?

Hyatt says that there are three basic voice archetypes from which we speak when we try to communicate truths of leadership and other weighty subjects. Hyatt listed them as follows:

Unfortunately for me, I am not as well-read in all of the Middle Earth comings and goings of JRR Tolkien’s The Hobbit and The Lord of the Rings trilogy as I could be. Fortunately for me, Hyatt provided a well-known character from the novels that exemplifies the embodiment of the voice archetype.

Gandalf – The Sage — He is a protagonist that leads the Fellowship until his fall in Moria. However, he returns from death as Gandalf the White to lead the armies of the West against Sauron, the Dark Lord.

Aragorn – The Sherpa — He is a protagonist and he is the rightful heir to the thrones of Arnor and Gondor. But perhaps more importantly, he was also a confidant of Gandalf and he was an integral part of the quest to destroy the One Ring and to defeat the Dark Lord Sauron.

Frodo – The Struggler — He is a protagonist and he is the bearer of the One Ring, given to him by his uncle, Bilbo Baggins. His quest is to destroy the One Ring in the fires of Mount Doom from which it was forged.

Which one am I?

Given the choices of the three — Sage, Sherpa, or Struggler, I am comfortable speaking in the voice of the Sherpa. Now, before anyone jumps all over me about accuracy, I realize that the word “Sherpa” does not even really mean “mountain guide” or anything similar. The word actually is an ethnic description of an ancient community of more than 150,000 people who inhabit the high valleys in the Himalayas.

Tenzing Norgay would have had no reason to climb the mountain were it not for Sir Edmund Hillary.Kevin Bowser

What is the point?

The point is this. We all have a leadership role to play. And we each speak with a leadership voice. Mine just happens to be the voice of the Sherpa. I am not a Sir Edmund Hillary. But, I can help take someone like him make it to the top. I can even take them somewhere that I may have not actually been to yet. But I know the area and I know the paths and pitfalls along the way. And I can help them reach their goal of conquering the mountains in their lives.

What can I do for you?

As I said, I am really starting to step up my game when it comes to leadership coaching. I have always had a little of the Sherpa mentality. For any of you that have ever received an email from me, you will note that I recognize that as being central to my overall view of the leadership circle or continuum. I am sometimes a leader. I am sometimes a follower. And I am sometimes a guide. And perhaps it is the voice of the guide that best fits who I am.

If you are looking for a guide along the way, let’s talk. Let’s sit down and map out a path to the leadership mountain that you are climbing.

Categories: Leadership Lessons, Leadership Styles, Resources
Disclosure of Material Connection: Some of the links in the post above are “affiliate links.” This means if you click on the link and purchase the item, I will receive an affiliate commission. Regardless, I only recommend products or services I use personally and believe will add value to my readers. I am disclosing this in accordance with the Federal Trade Commission’s 16 CFR, Part 255: “Guides Concerning the Use of Endorsements and Testimonials in Advertising.”