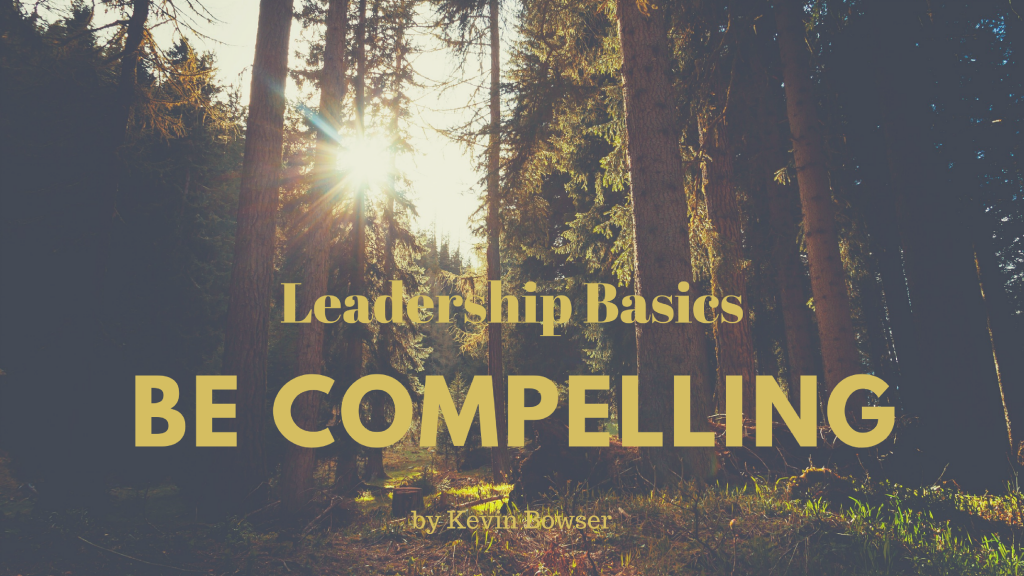 I think that I have mentioned before that I just love a good quote. Today, I return to a quote that I wrote about several years ago. It deals with the need for us to be “compelling” leaders.

“So why do we remember him? We remember him because nothing is more compelling than a good man in an evil time.”

Just let that sink in a moment.

The speaker was Charles Chaput, the archbishop of Philadelphia. And I was listening to a speech given on July 8, 2013, at the National Shrine in Washington, DC. In his speech, he centered his thoughts around a well-known military and political leader.

He quotes from this leader’s own words written while on a military campaign Germany. Apparently, he kept a diary. And some of his words are worth sharing today because they gave rise to Archbishop Chaput’s words that so captivated me.

The man that Chaput quotes wrote these words as well:

“Speak both to the powerful and to every man—whoever he may be—appropriately and without affectation. Use plain language. Receive wealth or prosperity without arrogance, and be ready to let it go. Order your life well in every single act. Behave justly to those who are around you. Be vigilant over your thoughts, so that nothing should steal into them without being well examined.”

Leaders, are you speaking to both powerful individuals as frequently and with the same voice as you speak to the “every man?” Are you speaking with simple language? How do you feel about some of the trappings and perqs that come from power? Is your life “ordered?” How do you treat your followers? And are you diligently guarding your thoughts?

“Every moment, focus steadily on doing the task at hand with perfect and simple dignity, and with feelings of affection and freedom and justice. Put away hypocrisy. Put away self-love and discontent with your portion in life. We were made for cooperation, and to act against one another is contrary to nature. Accept correction gladly. Teach without anger. Keep yourself simple, good, pure, serious, a friend of justice, kind, affectionate, and strenuous in all proper acts.”

Leaders, are you focused on your tasks? Or are you focused on what everyone thinks about you? Would those around you think that you are hypocritical because of how your actions and words are perceived? Do you lead as one who values cooperation? How do you receive correction? Are you accountable to anyone who can provide correction? Is your existence defined by acts that are simple, good, pure, serious, kind, affectionate, and strenuous? And are you a friend of justice?

So why do we remember him?

We remember him because, as Archbishop Chaput says, “nothing is more compelling than a good man in an evil time.”

Now here is the kicker. These words were written more than 1,800 years ago. The author probably didn’t intend to see his words published. Remember, they were battlefield journal entries and not press releases. He wrote mainly to strengthen his own convictions. And many of his thoughts captured in his journal were actually written during times of war, in the wee hours of the night, in the cold of winter, and from the German frontier.

Who wrote these words?

They were written by the Roman emperor Marcus Aurelius.

Marcus Aurelius was an emperor and emperors held absolute power. However, Aurelius lived in a despicable and corrupt time of the Roman Empire. Much of the despicable acts were being committed by his own son, Commodus. Yet despite that, he chose to seek what is true and right and lasting. He chose to begin by disciplining his own life accordingly. In the context of his time, he was a just man and a moral ruler. He achieved that recognition of having dignity of character by prioritizing his life and his heart first to the pursuit of wisdom, and only then to Rome.

That’s why he’s important for us today. He pursued wisdom above everything else. And though his beliefs were very different from our own, we can learn from his example. Those three qualities that Marcus Aurelius sought in his own life—the true, the right, and the lasting—are central to Christianity, Judaism, and many other religions and moral philosophies. Because of that, they are worthy of our pursuit. As leaders, we would do well to consider the words of Marcus Aurelius.

Our times are evil. Are you a compelling leader?

Categories: Leadership Basics, Military, Recognized Leaders
Disclosure of Material Connection: Some of the links in the post above are “affiliate links.” This means if you click on the link and purchase the item, I will receive an affiliate commission. Regardless, I only recommend products or services I use personally and believe will add value to my readers. I am disclosing this in accordance with the Federal Trade Commission’s 16 CFR, Part 255: “Guides Concerning the Use of Endorsements and Testimonials in Advertising.”