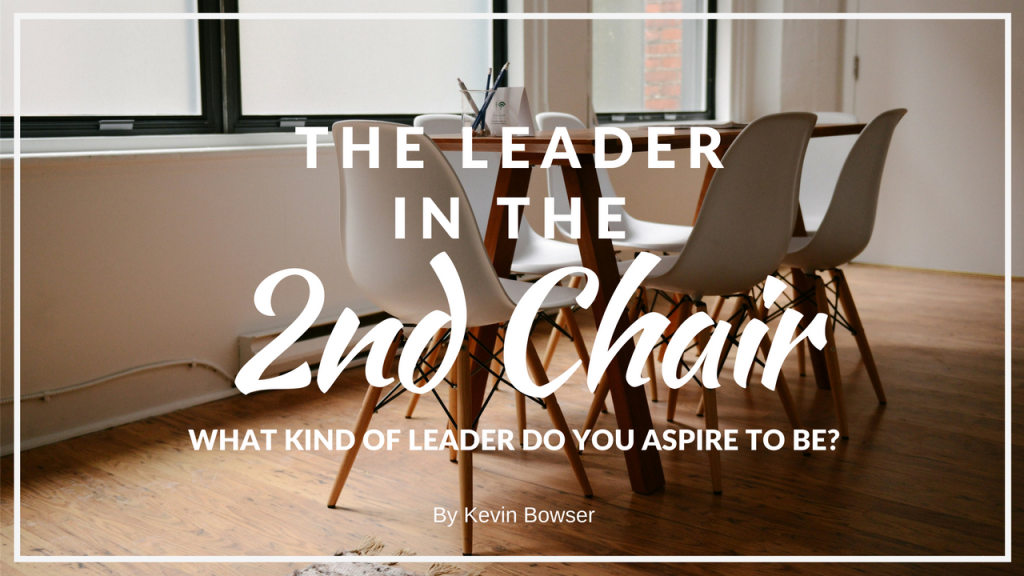 We are in an ugly political season. In fact, it may be the ugliest one in my lifetime. So, in light of that and from a political perspective, one of the political leaders that I admired the most was Sen. Howard Baker of Tennessee.

I have been giving a lot of thought about the topic of “Leading from the Second Chair”. Although I have not yet read Bonem and Patterson’s book by that name, I have seen a lot of that type of leadership in my own life and in the life of some of those who I admire greatly.

Sometimes we are called to lead from the 2nd chair? Are YOU able to do that?

His was the very first presidential campaign that I worked on was as a young volunteer. Unfortunately, I was a part of his unsuccessful attempt to become President in 1979. I admired Sen. Baker on multiple levels. Others admired him as well. Known in Washington, D.C. as the “Great Conciliator”, Baker is often regarded as one of the most successful senators in terms of brokering compromises, enacting legislation, and maintaining civility across the aisle. A story is sometimes told of a reporter telling a senior Democratic senator that privately, a plurality of his Democratic colleagues would vote for Baker for President of the United States. Unfortunately, in my opinion, not enough Americans apparently shared that same sentiment.

Some of the times during his career that I admired him the most were his days as White House Chief of Staff for Ronald Reagan. Reagan was the opponent who defeated him early in the primary season and caused him to drop out after the Iowa Caucuses and the New Hampshire Primary.

Baker did not seek re-election in 1984. However, as a testament to Baker’s skill as a negotiator and honest and amiable broker, Reagan tapped him to serve as Chief of Staff during part of Reagan’s second term (1987–1988). Many saw this as a move by Reagan to mend relations with the Senate, which had deteriorated somewhat under the previous chief of staff, Donald Regan. It is interesting to note that in accepting this appointment as Chief of Staff, Baker chose to skip another bid for the White House in 1988. He would never run again. Who knows if he would have been successful? I, for one, would have loved to have seen him elected in 1988 over the alternative that year.

So what is the leadership principle that I admired in Sen. Baker? Well, I think it is embodied in these two principles.

He understood the power and responsibility to still lead even though you are not “The” one. He had ambitions to be “The” one. But ambition, skill, and aptitude did not translate into the Oval Office for Sen. Baker. So, he withdrew for the sake of the overall mission of his party and supported the ultimate candidate who went on to become President. He waited patiently for the second term of Ronald Reagan and began to make his own plans for another run for the White House. But then “Duty” called and when the President needed help, Sen. Baker was there to become White House Chief of Staff and help guide and stabilize a presidential staff and office that had done great damage to the relationship with the Legislative branch of the government.

Did he want to be President? I am sure he did. Did he think (and know) that he would be able to build on the great recovery that was begun under President Ronald Reagan? I am sure he thought that also. But duty called and his party needed him in the position of a second chair leader.

And then there is this.

Sen. Baker never forgot what was most important to him. For “Duty” called again. This time, duty was the sacred vow that he had made before God and friends and family to love his bride Joy (Dirksen) Baker in sickness and in health. And Joy was suffering from cancer. So, he gave up the power and the prestige of the White House and Washington, DC to return home to care for Joy in her final days.

What kind of leader do you aspire to be?

Do you have to be “The” one? Or are you content to see the bigger picture and put your personal and professional ambitions aside for the sake of another?

These are tough questions. They call for serious introspection.

Categories: Recognized Leaders, Servant Leadership
Disclosure of Material Connection: Some of the links in the post above are “affiliate links.” This means if you click on the link and purchase the item, I will receive an affiliate commission. Regardless, I only recommend products or services I use personally and believe will add value to my readers. I am disclosing this in accordance with the Federal Trade Commission’s 16 CFR, Part 255: “Guides Concerning the Use of Endorsements and Testimonials in Advertising.”