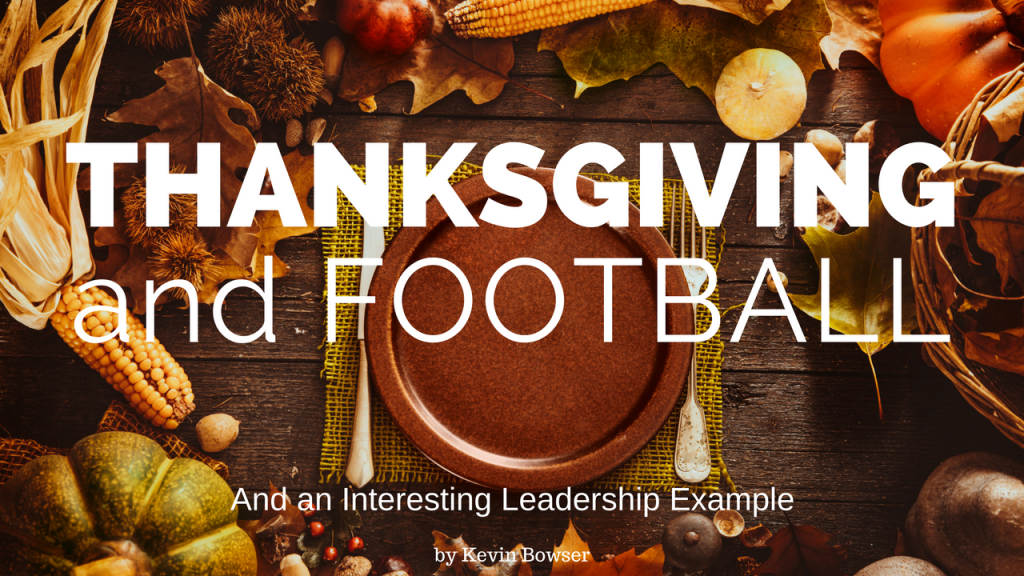 My thoughts today run from family to football and back again. I hope that you are having a great day today and that it is filled with family, food, and fellowship.

Thanksgiving has been known for many traditions. Not the least of which, unfortunately, may be that there is football on Thanksgiving. The Dallas Cowboys have played on Thanksgiving Day since 1966 and that my friend is a tradition.

I grew up and became a Steelers fan in my teen years. They were awesome in the 1970s. I tried to be a Patriots fan in the early 80s. I was a Falcons fan during our time in Atlanta. And when we moved to the DC area, I became a Redskins fan. Those Dallas Cowboys weren’t bad either. Even the most ardent Redskin fan would have to admit that. But one of the best thing to be said of the Cowboys for about 29 years in a row was their coach – Tom Landry.

Leadership is getting someone to do what they don’t want to do to achieve what they want to achieve. – Tom Landry

There have been some amazing coaches in pro football, Vince Lombardi, Bill Walsh, Don Shula, Chuck Knoll, Joe Gibbs, and Tony Dungy are only a few of the great coaches that have walked the chalk on the sidelines on cold Sunday afternoons. But, beyond their ability to motivate and draw up the Xs and Os, consider for a moment one of the key tasks of the football coach as the leader of the team. He must get his guys to do that which is tough and tiring in order to achieve the thing that they all really want – winning the Super Bowl. Each of these coaches achieved that ultimate goal. They got to the Super Bowl. And they won the Super Bowl. (Although it wasn’t called that when Lombardi was coaching the Packers.)

Great coaches are able to get the team to do the hard thing in order to experience the great thing.

What is the point on this Thanksgiving Day?

The point is today is to continue to see the theme and the thread from some of my recent articles — Leaders building more leaders. I am speaking to you fathers this day. And I want to remind you that it is our job as fathers to get our families to do those things that they sometimes don’t want to do (because they aren’t always fun) in order for the family to succeed and set the example for new families and to create more winning traditions.

Oh, and how ’bout them Cowboys?

Categories: Fatherhood, Holiday, Recognized Leaders
Disclosure of Material Connection: Some of the links in the post above are “affiliate links.” This means if you click on the link and purchase the item, I will receive an affiliate commission. Regardless, I only recommend products or services I use personally and believe will add value to my readers. I am disclosing this in accordance with the Federal Trade Commission’s 16 CFR, Part 255: “Guides Concerning the Use of Endorsements and Testimonials in Advertising.”