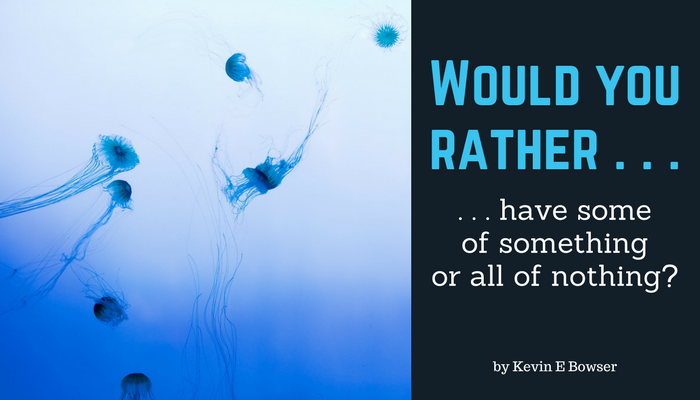 There is a game going around. It is been popularized in a movie from 2012 by the same name. It is called, “Would you rather”. And it has been spread throughout the culture via its popularity on social media sites such as “Reddit” and “BuzzFeed.” It is also available in an on-line version on http://either.io.

The question that seems to be the most fitting for the events in Washington, DC is this: “Would you rather have some of something or all of nothing?”

I am watching this health care legislation work its way through the U.S. Congress. And it is providing incredible insight into what leaders do when faced with two fiercely opposing positions. Now, I do not, for one second, care about your political affiliation or the direction to which you lean. My concern today is about the leadership implications of each of the options — some of something, or all of nothing.

If you are a leader, you will have to face a similar (albeit a smaller scale) scenario where you will be in a situation where there are two competing interests. You will face a situation where neither side seems initially willing to negotiate or to compromise. What is the role of a leader in this situation? What is the “right” thing to do? Do you strive for an outcome whereby you at least get some of something? Or do you hold your ground and end up with all of nothing?

Leaders Lead to a Compromise

No leader with integrity will ever compromise on an issue or legality or morality. (So, let’s keep the current health care debate out of our discussion.) But there is always room for compromise when you are not making decisions with a moral implication. And leaders must lead others to find that compromise. Leaders are responsible for outcomes and the results whenever they encounter such polarized forces.

Would you rather have all of nothing? This is the result when egos prevail. It is most often the case that ego and unbridled self-interest drive leaders to this unfortunate result. They will choose their own self-interest over the interests of those that they are supposed to serve. They will doom a deal that they personally or ideologically despise rather than work for and accept a compromise that will provide an incremental value to their followers and all of the parties involved.

Would you rather have some of something? This is the result when leaders are able to see beyond their own preconceived notions and their own self-interests. These leaders always have the bigger picture in their mind and realize that getting 100% of everything that they want is an unrealistic expectation. These leaders will choose the interests of others and work for a solution that brings some measure of value to those that they lead and represent. It may not be their first, second, third, or 39th choice. But it brings some incremental value to those who need it.

I think it is simply this. A real leader understands and works for compromise. A real leader will not doom their followers because they are ideologically opposed to compromise. Compromise has become a dirty word. It is not. It is the lubrication to the wheels of progress in any organization.

Compromise is the lubrication to the wheels of progress in any organization.Kevin E Bowser

What about you? Do you need to grease the wheels of progress with a little flexibility and compromise?

Categories: Conflict, Leadership Challenges, Leadership Lessons
Disclosure of Material Connection: Some of the links in the post above are “affiliate links.” This means if you click on the link and purchase the item, I will receive an affiliate commission. Regardless, I only recommend products or services I use personally and believe will add value to my readers. I am disclosing this in accordance with the Federal Trade Commission’s 16 CFR, Part 255: “Guides Concerning the Use of Endorsements and Testimonials in Advertising.”