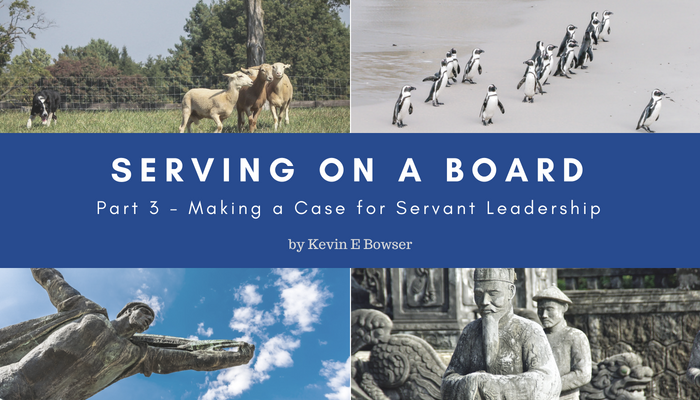 What is Servant Leadership?

“The servant-leader is servant first… It begins with the natural feeling that one wants to serve, to serve first. Then conscious choice brings one to aspire to lead. That person is sharply different from one who is leader first, perhaps because of the need to assuage an unusual power drive or to acquire material possessions. The leader-first and the servant-first are two extreme types. Between them there are shadings and blends that are part of the infinite variety of human nature.”

The servant-leader is servant first. It begins with the natural feeling that one wants to serve.Robert K Greenleaf

The more recent application of servant leadership to business and industry has taken the form of focusing on a set of behaviors and practices that turn the traditional “power leadership” model upside down. Rather than the followers working to serve the leader, the leader actually exists to serve the followers. Servant leadership is centered on a desire to serve and emphasizes collaboration, trust, empathy, and the ethical use of power. Its primary goal is to enhance individual growth, teamwork and overall organizational involvement and satisfaction.

Although I have been focusing on non-profit boards, business and industry have been drawn to this leadership style because the end result (whether intentional or accidental) is a greater focus on the employee and the customer as the growth engine of the organization. This focus has resulted in increased engagement and “buy-in” from both internal and external stakeholders (employees, management, customers). Benefits accrue in both tangible and intangible ways.

How does this look on the board of a non-profit organization?

But, let me hasten to say that just because we are often volunteers, that fact does not place us in a position of servitude. We are not indentured or slaves to the organization. We are, in fact, the leaders of the organization. We just execute that leadership with the heart of a servant.

How would servant leadership manifest itself in us? Perhaps it would show up in our leadership behaviors in the following ways:

Ethical Leadership — Servant leaders are ethical leaders. I toyed with the idea of using the words “moral leadership.” But, morality seems to be an emotional word. More folks are willing to accept the idea of ethical leadership. Largely because most people view morality on the individual choice level, while ethics are more easily viewed as having a societal impact. A servant leader recognizes that they are there to lead and to do so to bring maximum value to the organization and not themselves.

Empathetic Leadership — Servant leaders are empathetic leaders. They take the time to get to know those they lead and they know their pain points. And they seek to minimize that pain. They form real and long-term relationships with their followers and put their interests above their own. A servant leader recognizes that they are there to do no harm to those they lead.

Encouraging Leadership — Servant leaders are encouraging leaders. Here, I also toyed with another word. I thought about using the word enthusiastic because it embodies the emotion of encouragement. And I will admit it, there are sometimes when our role looks a lot like that of a cheerleader for the staff or for the organization. They are there to give those words that promote the individual and corporate actions of the staff and team. A servant leader recognizes that their words have an impact and chooses those words carefully.

I know that many of you are in various leadership roles. So, I say “Thank you!” You are not in it for the money. You are a volunteer! And you are not in it for the recognition. You often labor in anonymity. And you don’t do it for gratitude that is expressed by the organization. You have an internal sense of gratitude for having served and having done the best that you can.

But, I say a big “Thank YOU!” for being willing to serve on a board and to lead with servant leadership.

Categories: Emotional Intelligence, Following, Followship, Leadership Lessons, Leadership Skills, Leadership Styles, Servant Leadership
Disclosure of Material Connection: Some of the links in the post above are “affiliate links.” This means if you click on the link and purchase the item, I will receive an affiliate commission. Regardless, I only recommend products or services I use personally and believe will add value to my readers. I am disclosing this in accordance with the Federal Trade Commission’s 16 CFR, Part 255: “Guides Concerning the Use of Endorsements and Testimonials in Advertising.”