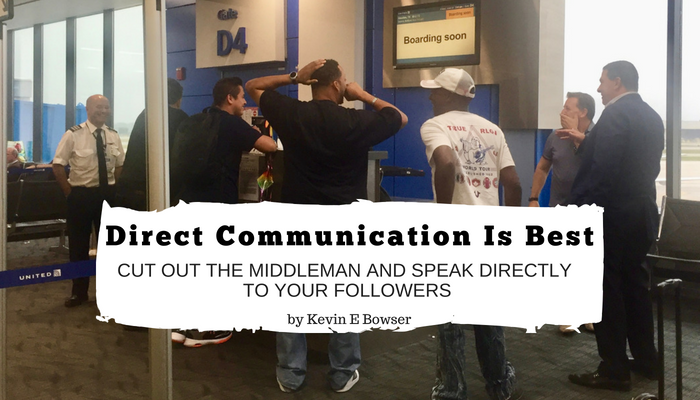 We were supposed to board the plane at 2:50 pm and be “wheels up” at 3:19 pm. That was the plan. But the incoming plane arrived with three broken seats and we were placed on a mechanical delay. In the midst of doing the pre-flight routine, the pilots discovered that the plane had also been hit by lightning as it cut through some thunderstorms. Now there was another delay.

A total of 9 mechanical delays and we had no idea when we would leave Detroit to come home to Houston. One by one, the plane that was overbooked dwindled down its passenger list to only 11 men and 1 woman. And none of us knew when, or if, we were going to get home that day. The flight was never canceled. It was just on an indefinite delay.

Throughout the whole ordeal, the gate agents were great. But, there was really nothing that they could do except for relay information from the flight deck to us at the gate. So, every 20 or 30 minutes the gate get would unlock the door and walk down the jetway and board the plane to talk to the flight crew. We could not do that. We wanted to. But we could not go beyond the gate area until the plane was cleared to fly.

Time after time she would go to the plane and return with little or no real news. “The mechanics had not arrived. The mechanics were working on the problem. You may want to make other flight arrangements.” All of these messages were being relayed to us. But the real question on the minds of the few that remained was this: “Are we going to get home tonight?” It was more than 4 hours past our originally scheduled departure and we did not have the central question answered.

All we had was indirect communication. The gate agent was just a messenger.

No one left at the gate area ever got rude or angry. In fact, those of us left were the more seasoned travelers and we spent the time swapping horror stories and laughing at how all of this was unfolding.

And then it happened. The captain opened the door from the jetway to the terminal and walked out. Several of my new best friends in the world walked over to him and ask him the central question that each of us wanted to know. You could tell that he was not accustomed to speaking directly and face to face with his passengers. Usually, he would speak to them via the intercom system aboard the plane. He was clearly uneasy about this direct communication. He soon disappeared back down the jetway only to return again about 30 minutes later. This time he was more prepared because he knew that the faithful few would be waiting for him for some sort of update. He was ready. He told us that he had plenty of hours of flight time and that as long as we took off before 11 pm that night, he was good to go.

The third time he popped out of the jetway door he was almost jovial in his approach to his passengers. He even joked around with several of us. He was getting more and more comfortable talking directly with the folks that would eventually be behind a locked door if we ever boarded the plane.

The lesson for you and I as leaders is simply this. When at all possible, speak directly to your followers. We were his passengers. But, we were his followers for the purposes of this analogy. We all appreciated all that the gate agents did to help us have the information that we needed to make contingency plans. Was I going to need to spend the night at a hotel near the airport and catch the first flight out the following morning? Or, were we going to get home that night. The only one who knew that answer was the one who would have to make the decision. And that was the pilot.

His followers felt so much better after hearing directly from him. He could make no promises because he was not the mechanic working on the repairs. But the decision to fly was his to make. And we wanted to get a sense of his confidence about that flight departing at some point regardless of the amount to time it was already delayed. We needed direct communication from the leader and he provided it.

When at all possible, speak directly to your followers.Kevin E Bowser

Nearly six hours after our scheduled time of departure the gate agent processed us on to the plane. The flight attendants closed the main cabin door and we pushed back from the gate. In the end, there were only 16 total souls on board. Twelve passengers, two pilots, and 2 flight attendants.

We got a final and key piece of information as the flight attendants were going through the standard flight briefing. As they were concluding the safety portion, they said, “On behalf of your Houston based flight crew, welcome aboard.”

I really wish I would have had that piece of information 5 hours earlier. This crew wanted to go home as much as we did. And they got us home safe and sound.

Categories: Communications, Following, Followship, Leadership Lessons
Disclosure of Material Connection: Some of the links in the post above are “affiliate links.” This means if you click on the link and purchase the item, I will receive an affiliate commission. Regardless, I only recommend products or services I use personally and believe will add value to my readers. I am disclosing this in accordance with the Federal Trade Commission’s 16 CFR, Part 255: “Guides Concerning the Use of Endorsements and Testimonials in Advertising.”