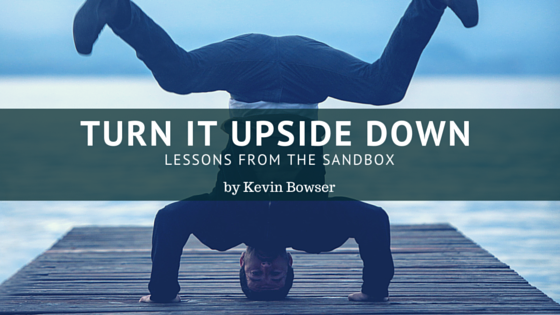 Let’s take one final look at some leadership lessons that I observed from the last two weekends that I spent playing with my youngest grandson in various sandboxes. The actions were simple. But the implications were profound.

Turn it upside down

Let me just offer a quick reminder of what went on in our little backyard sandbox. After a while of pouring sand in a little yellow funnel and watching it fall through the little hole and make the little red wheels spin and fall through a little sifting screen, my grandson got a little bored. So, what did he do? He turned the contraption upside down and started the process at what is actually the bottom of the toy. Did it work like it was supposed to? Of course not. But did he have fun and laugh at how it looked? Yes, he did. And isn’t that the point of playing in the sandbox?

The leadership lesson is this. Let’s always keep our eyes on the goal that we have set for ourselves and not on the tools that we use. The goal of the activity was to have fun. It was not to use the contraption to only sift sand and make the wheels spin.

Sometimes we get so enamored with the tools that we have at our disposal that we forget that they are the means to an end. They are not the end itself. The end game was to have fun in the sand. And fun we had!

Sometimes we get so enamored with the tools that we have at our disposal that we forget that they are the means to an end.
Click To Tweet

What does it mean to “Turn it upside down?”

One of the most oft-repeated mantras in business is this:

“The definition of insanity is doing the same thing over and over again expecting a different result.”

This has been widely attributed to Albert Einstein. I don’t know if that is 100% accurate. And I really don’t care. The point of reminding ourselves of that quote is that sometimes we have to try something different if we want a different outcome. And further, sometimes that difference needs to be radical. Like turning a sand sifting toy upside down and pouring sand in the opposite direction from which it was intended.

Here is another thought that also helps make my point. Former Navy SEAL, LCDR Rorke Denver tells the story of working with those going through BUDS and working on their sniper skills. He makes a counterintuitive statement about trying to sight in a sniper rifle and offers tips on making adjustments to the scope. He says the following:

“Make bold corrections. If you only make little corrections, you’ll get little results. Spin the dials on a rifle until you get close to your target, and then you can make minor adjustments.”

Did you get that? “Spin the dials.” I was an avid hunter in my youth. And I was never the kind of marksman that my father was. As hard as I tried, I was not good with a rifle. Maybe it was me. Maybe it was the rifle. I don’t know. But, I do know that I was a timid shooter. I was afraid of making a big mistake and missing the target. So I made little adjustments and got little results. It never occurred to me to make the kind of bold corrections that Rorke Denver would have had me make. And as a result, I never got close to the target.

I hope that you have enjoyed this short series. Let me offer this closing advice to you. Always be open to inspiration. Inspiration may come to you in the most unexpected situations. And, in case you missed the original article and the next two that expanded the thoughts in the overview article, here are links to the previous articles that make up the entire series.

Lessons from the Sandbox

Shake It Up and Find Capacity

Got to the Source

Thanks for being a loyal reader and for your passion for leadership.